Do you know Modern Stave Trade??? 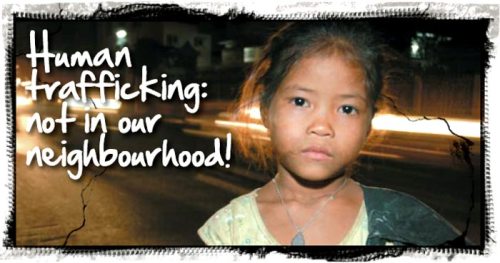 Human trafficking can be defined as “the recruitment, transportation, transfer, harbouring or receipt of persons, by means of threat or use of force or other forms of coercion, of abduction, of fraud, of deception, of the abuse of power or of a position of vulnerability or of the giving or receiving of payments or benefits to achieve the consent of a person having control over another person, for the purpose of exploitation.”
(UN Protocol to Prevent, Suppress, and Punish Trafficking in Persons)

While the means through which modern and traditional forms of slavery have operated differ greatly, the violation of human rights and human dignity are central issues in both practices, such as proclaimed in the 1948 United Nations Universal Declaration of Human Rights. Today, according to the International Organization for Migration (IOM), millions of people, primarily women and children, are subjected to this tragic fate, thus underscoring the imperative of all countries to address and prevent the trafficking of persons.

In the context of the “Project to Fight Human Trafficking in Africa“, UNESCO aims to promote effective and culturally appropriate policy-making to combat the trafficking of women and children in Western and Southern Africa. The project conducts policy-oriented research on factors related to the trafficking in pilot countries, collects best practices in fighting trafficking at its roots, and organizes training workshops for policymakers, NGOs, community leaders and the media.

In addition, the Trafficking and HIV/AIDS Project based at the UNESCO Bangkok Office tackles the linked triad of problems-HIV/AIDS, trafficking, and non-traditional drug use-in the Greater Mekong Subregion, by researching, developing, and implementing programmes which crosscut these issues to address the needs of at-risk and vulnerable populations. This project builds on UNESCO’s regional pillar of “extending international protection to endangered, vulnerable and minority cultures and cultural expressions”.

Posted by African Voice of Peace on August 23, 2013 in Uncategorized

4 responses to “Do you know Modern Stave Trade???”